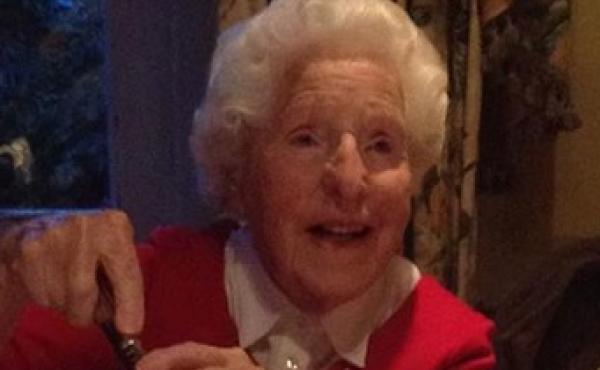 In 1909 amidst major historical moments in Kilburn, London, Lilian Ward was born on November 10th...

In 1909, five years before the beginning of the First World War, Woolworths opened its first UK store, a dozen eggs cost a shilling, and the Old Age Pension Law came into being, providing everyone over 70 with a low income.

Queen Victoria’s son Edward VII was on the throne; there was a Liberal Prime Minister, Herbert Asquith, and for the first-time moving pictures were shown in colour at Madison Square Garden.

And, in Kilburn, London, Lilian Ward was born on November 10th. Having reached the age of 110 she died earlier this month, surrounded by her family in Stone, Staffordshire. She’s believed to have been the oldest person in the whole of Staffordshire and the West Midlands.

Lilian had a long-standing relationship with Independent Age.

“Mother felt part of the Independent Age family,” says her eldest son Mike, 78. “Independent Age helped all along.” For many years, until they retired, she had an Independent Age visitor volunteer come in to have a good chat and listen to her memories. That visitor was Bill Cornwall, now 86 who will be attending her funeral.

Lilian was always “fiercely independent,” says Mike. In 2018 she decided against a planned move to a care home and lived peacefully at home, with the help of wonderful carers, until 10 days before she died.

She believed in living life to the absolute fullest.

“She worked on an allotment with one of her sisters until she was in her eighties, attended keep fit classes until she was ninety and drove until she was nearly 104. She loved driving, including on the continent. Whenever she was asked about staying fit and healthy, her answer was always to keep active."

She believed in living life to the absolute fullest. “She worked on an allotment with one of her sisters until she was in her eighties,” Mike recalls, “attended keep fit classes until she was ninety and drove until she was nearly 104. She loved driving, including on the continent.” Whenever she was asked about staying fit and healthy, her answer was always to ‘keep active’.

Lilian also had a great love for travel. “Even before she was married, she would go from London to Paris with her sisters. One time she and her sister, Phyl, even had to leave a Rhine Cruise rather sharpish in 1939, not realising until they returned to the UK, the severity of their situation and that war was looming.” Encouraged to travel by the company she worked for (Royal Dutch Shell) as a secretary in London she went on to visit the US and most countries in Europe, as well as Madeira and the Canaries.

Lilian married her husband John Ward, a Scot, in 1940, having met him at church. She went on to give up her secretarial work and the couple had four sons.

John was the Linen Buyer at Jenners in Edinburgh before he moved to London, then Derry & Toms in London, and finally at Colsons of Exeter in Devon.  During the war John was called up to be part of the war effort and went round to hotels buying up linen ware for hospital use.

Later the couple worked together in their own mini department store in Gillingham, Dorset. They sold general drapery, ladies’ fashions, bed linen, hosiery and much more. In 1963 they downsized to a haberdashery on the outskirts of Bournemouth where they worked for four years until Lilian became widowed. They had been married for 27 years before she became a widow at 52.

In 1973 Lilian moved to Stone in Staffordshire to be near her son, Mike and his wife Jill, who both supported her greatly in her last years, along with the rest of the family.  As well as her sons, she had nine grandchildren and 16 great grandchildren.

“Everyone said mother was an amazing lady. She enjoyed trips out with her family until just before she died,” says Mike, who added that the palliative care she received in her last days at the Frail Elderly Assessment Unit (FEAU) at Royal Stoke Hospital was first class.

As the family prepares for Lilian’s funeral at St Dominic's Church, Margaret Street, Stone on Monday March 2nd he says, “we are not sad because she had a long & happy life and has left us with lots of lovely memories.”