Compassionate Ageism: Reinforcing ‘the terror of age; the weak, catastrophic victim of age’? 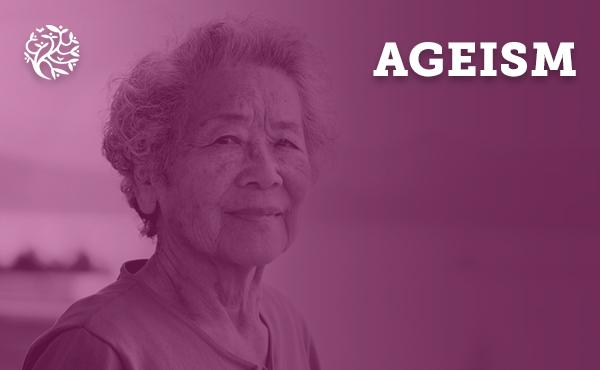 Dr Mervyn Eastman explores the politics of language around ageing.

The problem of defining people by their age

I first came across the term ‘compassionate ageism’ in Betty Friedan’s book The Fountain of Age published in 1993[i]. It remains one of a handful of my most treasured books, which have had a profound influence on both my thinking and professional practice. It captured my mind, but, more importantly, my soul. Here in its very personal pages is laid open her own ‘voyage of discovery into a different kind of ageing’. It is both deeply disturbing and yet inspirational. It challenged the very decline, dependency and sickness narrative currently dominating civic and civil society.

If we define Compassionate Ageism as the belief that older adults are needy and deserve special policies to help them, we are at risk of ‘othering’, which can lead to, for example, the very corruption of care so exercising us in the field of safeguarding. In addition, it has the potential to reinforce paternalistic, patronising and disempowering responses by public and voluntary sector workers. It has the potential to regard all older adults as victims of the ageing process and growing older. A yearning for our youthful selves.

Compassion, as Paul Bloom writes, ‘is biased’ and ‘we tend to tilt things to favour the outcome that benefits ourselves’.[ii] This factor, I argue, applies to public services, commissioners, age sector charities, and, of course, celebrities who dally with patronage as a perk of their status.

Ageism and the not-for-profit sector

If we regard the Charity sector as a good thing, which, in certain circumstances it can be, we can so easily (and not unreasonably) feel good about ourselves donating money or time – or both. Where would Charities be without the army of volunteers working tirelessly to advance the charitable objectives and purposes? What better cause than that of alleviating those older adults who, for whatever reason, are living with distress? But if we, at the same time, stereotype old age as a time of loss and decline to justify our charitable good deeds, we are blinded to the potentially pernicious consequences of our actions.

In Margaret Gullette’s book Agewise: Fighting the New Ageism in America, she argues that the decline narrative refers to ‘the entire system that worsens the experience of aging past youth’- that is new ageism[iii]. It demonises and commodifies ageing – of getting and becoming older. It is an ‘erosion of seniority and respect for ageing; that stops and reverses the manipulation of the cult of youth and the present narrative of fatalism about old age, and obscures those forces that undermine our understanding of age and the fullest possible experience of life itself’[iv].

Thus New Ageism underpins Compassionate Ageism, which in turn leads to the systematic stereotyping and discrimination against people who are old – the 1987 Butlerian definition of Ageism. More importantly, all forms of ageism are the ‘offensive exercise of power with reference to age’[v].

We are all familiar with ageist stereotypes and I shall not rehearse them here, and, in addition, the different theories that support ageism (e.g. Social Darwinism, Disengagement Theory, etc.). But, how far do we recognise that Compassionate Ageism is a system of oppression?

Older people do not form an exclusive group, given that everyone will potentially become a member and that ‘the discrimination which results from ageism can appear to result from the natural process of ageing, rather than a social construct’. Oppression has two main vehicles: behaviour and language. Both come into play within the Charitable and public sectors – that is, imaging, i.e. wrinkly hands and the ‘elderly’. Both favoured by the age media specifically and media generally, the imaging becomes a marketing tool that is not only lazy, but in essence, dehumanises and de-personalises, as it is the process of grouping people together. Arguably, one’s charitable purpose is governed by a particular demographic (s), or health and social conditions/circumstances when bidding for funds or encouraging legacies; it is very useful to present images of older adults as victims, as vulnerable, thereby legitimising turning a heterogeneous demographic as one homogeneous group.

The politics of language

I have so often railed against such terms as ‘the elderly’, ‘the silver’, ‘the vulnerable’ and, especially, the imaging associated with the so-called victims of loneliness, of dementia, of isolation, and, what better way than a pathetic image of an older adult or close-up of wrinkly hands – or whatever that encourages money into the coffers of those age sector organisations to continue their reinforcement of Compassionate Ageism.  The public sector is equally culpable, but, perhaps more nuanced, when it comes to policies and practices. Let us now turn our attention to national governments and town halls.

I have sat with ministers and civil servants at various times and in different settings, paying particular attention to their language and approach to older adults. That experience over many years was, on rare occasions, encouraging, yet deeply disheartening. Ministers patronising and being ‘yes-ministered’ by their senior civil servants. All-too-frequently, civil servants at the end of the day were obsessing about their respective ministers not being embarrassed. I recall one shadow minister meeting with me and, when shaking hands, said, ‘oh, you’ve come to talk to me about wrinklies’. More generally I have found ageism endemic, dressed as concern, sympathy, compassion or benevolence. Professor Tom Scharf, Professor of Social Gerontology, via a Tweet to me recently referenced Bythewy and Johnson’s term ‘benevolent patronage’. It wonderfully illustrates an ageism written large across many a Whitehall department, an age sector charity, town hall officials and, perhaps even more disturbing, older people themselves. Funders do, on occasions, indulge in such ‘benevolent patronage’.

Older people are not a homogenous group

If the likes of Betty Freidan and Margret Gullette introduced me to Compassionate and New Ageism, it was Robert Binstock who caused me to think more objectively[vi]. His writing on this particular form of ageism highlighted how the politics of policies on ageing, the tone and texture of public debate about older adults as beneficiaries of government policies, has changed over the past fifty years. Whilst he is obviously referring to the USA, this issue could equally apply in the context of the UK.

Compassionate Ageism is rooted in what Binstock calls ‘the rise of collective concern and indeed the very construction of an old age welfare state was facilitated by it’. To attribute to the older adults the same status and characteristics and ‘just desserts to a heterogeneous group of the aged or ‘elderly’, that has and is stereotyped, then we have accepted the simplified notion that all older persons are essentially the same and worthy of government assistance’[vii]. This point is important. It says that Compassionate Ageism positively facilitated policies and programs at a national and local level that benefits older adults. In other words, ‘benevolent patronage’. Arguably, our own welfare state built on the so-called five giants benefited all through social security, health, education, housing and a policy of full employment. Over the intervening years, however, in the UK the welfare state has increasingly been under siege. Another point Binstock makes is that, during the 60s and 70s, ‘just about every issue or problem affecting some older individuals that could be identified by advocates for older persons became identified as a government responsibility to some extent’[viii].

However, just as Reagan and George W Bush spearheaded the resurgence of a conservatism (Neoliberalism), here Thatcher, Major and, some would argue, all PMs subsequently, have reinforced a public, political discourse affecting older adults within exactly same context.

Compassionate Ageism is and remains a stereotype which determines how older people are viewed and we have seen in recent times a different resurgence whereby baby boomers (born 1945-1964) are generally considered affluent, greedy, undeserving beneficiaries to the very policy reforms of the welfare state. Adding to the mix the Brexit factor, we see a shift of stereotypes – but stereotypes they remain – into generational equity and conflict (we have robbed our children and grandchildren of their potential earning power, their health, their security and their futures). The actual Boomer numbers and their voting leverage reinforces a sense of grievance by the Millennials as they see their ageing parents and grandparents float away, not on a well-deserved mythical iceberg, but on a cruise liner. The notion of senior, grey-silver power, whether through a ballet box or bank account, is itself a myth.

Returning to Compassionate Ageism, and forgive what might be seen as a cul-de-sac above, my key message is that it remains a fundamental stereotype. What has changed is the nature of that stereotype that sees older adults as either goodies or baddies – deserving or undeserving. We have myths that affect how all older adults are perceived, whether in terms of their body, their self, living contexts, endings and loss[ix]. They remain powerful, as does the pernicious belief that older adults are needy and deserve special policies to help them which, in turn, feeds the view that old age, by and large, is a time of loss and decline, justifying our ‘benevolent patronage’. The help has become professionalised via state direct and indirect intervention, aided and abetted by age sector enterprises, interpretative theory critiques, functional theory limitations, and the continual pathologising of ageing.

The age industry, unsurprisingly, is also populated by a whole range of special interest groups of older people, who see themselves as ‘representatives, either locally, regionally and even nationally’. Let us be clear that these so-called older representatives frequently ‘other’ older adults. Those whom they consider as somebody else, be they dependent, sick, lonely or isolated – which have been given the keys to the offices of government at all levels.

One CEO (now retired) of a large age sector charity once boasted that he could enter any ministerial office and would be listened to at any time! A past general secretary of a national pensioners organisation boasted that he represented all pensioners. This symbolic legitimacy of such organisations is indeed listened to, given public platforms, and have a disproportionate influence on government policy. Older celebrities frequently use their present, past or imagined status to speak for older adults, or to champion particular age issues. In recent years, the government has become obsessed with recruiting older celebrities to spearhead their government rhetoric as if somehow the stardust would fall and ‘things could only get better’.

It is seldom realised that this stardust frequently distorts the narratives and creates epidemics out of particular issues. The public buy into them and, like fake news, believe the messages. The ‘old age lobby’ has much to answer for in the distorting narratives around loneliness, dementia, frailty, social isolation and poverty – to name but a few.

Notwithstanding the academic critique of Compassionate Ageism, I would summarise it as follows:

Older people are a problem = we are somebody else

We must do something = rescue

Age has to be avoided = pity

If our emotional and practical responses are that older adults are somebody else, then feelings of plight, pity, decline and hence rescue, beware, the rescuer can easily become the persecutor and good intentions become, in reality, oppression.

vi Binstock. RH. ‘The Oldest Old: A Fresh Perspective on Compassionate Ageism Revisited?’ Paper presented to the American Association for the Advancement of Science (New York, May 1984)