The failure to deliver Pension Credit to 1.06 million older people who are entitled to it is costing the health and social care systems in Great Britain an estimated £4 billion per year, says older people’s charity Independent Age.

Pension Credit, a benefit designed to keep the least well-off pensioners out of poverty, is currently being received by just six in 10 (61%) of those who should be receiving it – leaving many on a threadbare income and having to choose between heating and eating.

New research from the Centre for Research in Social Policy at Loughborough University, commissioned and published by Independent Age, has found that the low take-up is creating significant knock-on effects for the NHS and social care, costing taxpayers an estimated £4 billion per year.

This bill to the taxpayer is significantly higher than the annual cost of giving pensioners the £2.2 billion to which they are entitled but are not receiving.

Report authors Professor Donald Hirsch and Dr Juliet Stone found that the NHS bears the brunt of the additional demand, with pensioners on a low income likely to need more health care and services, such as prescriptions or the use of a hospital bed. The resulting costs to health care systems are estimated to be between £3.02 billion and £4.81 billion per year.

Those missing out on Pension Credit are also more likely to need social care – whether residential or home-based – which incurs additional costs to the state of between £66 million and £189 million per year.

The report concluded that if Pension Credit take-up was lifted from 61% to 100%, then almost 450,000 pensioners could be lifted out of poverty, reducing pensioner poverty to its lowest ever level, and resulting in substantial savings to the NHS and social care systems over the long term.

Independent Age is calling for the Government to put in place an ambitious, publicly available action plan detailing how it will work to increase the uptake of Pension Credit over the next five years.

“What we can see from this report is that ensuring the poorest pensioners have a livable income is not only the right thing to do, it’s the economically responsible thing to do,” she said.

“Taxpayers are unnecessarily footing a health and social care bill of an estimated £4 billion, when if the Government ensured older people received the £2.2 billion to which they’re entitled, many of these additional costs to our health and care systems would be alleviated. Reducing pressure on our hospitals and care services is especially critical right now, as we continue to cope with the effects of COVID-19.

“A take-up rate of 61% for a benefit designed to keep older people out of poverty is indefensible – and this rate has stayed stagnant for a decade. Without this money, many people are prevented from living with dignity and having a social, well-connected later life.

“The Government needs to urgently create an action plan that contains high quality, up-to-date research into who is not claiming Pension Credit and why they are not receiving it. There needs to be recognition of the active role the Government must to play to increase Pension Credit take-up.”

Pension Credit recipient Bert Pearson, 94, said without the benefit, he would struggle to pay for basic essentials like heating and food.

“They rarely tell you what you’re eligible for – it’s up to you to go and find out for yourself,” Mr Pearson said. “For me, it’s opened up the door to other things, like the winter fuel payment.

“If I had any less than I did now, I’d be struggling to get by. It would make an awful difference.

“Many people don’t realise that when you’re on an income like mine, you have set out pound for pound where it’s going to go. Quite frankly, when you’ve done that, there’s nothing left.”

Read our new research showing the impact of low take-up of Pension Credit on health and social care spending. 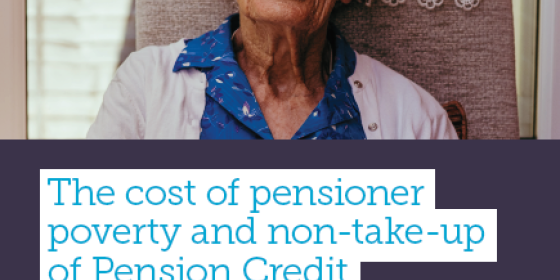