Only one in five councils have separate social care appeals process, according to older people’s charity

Fewer than one in five local authorities have a dedicated appeals process for social care, according to new research by Independent Age, the older people’s charity. This means the only option many people have is to make a complaint – a process that can be slow, stressful and leave them living with inadequate care or unfair costs.

In a new Independent Age report, Reviewing the case: the right to appeal in adult social care, the charity investigates how people can challenge decisions about the care and support they receive, an often-neglected aspect of social care.

The report found that most councils use a complaints procedure, rather than a separate social care appeals process. This can mean that people could be waiting as much as six months for their complaint to be resolved, or even longer if an extension is applied. Calls to the Independent Age Helpline also suggest that using the word “complaint” can be off-putting for some older people.

Of those local authorities who did have an appeals process, the most common appeal requests were in relation to changes to care packages (25%), outcomes of care needs assessments (20%), and eligibility (16%).

Independent Age is calling on the government to introduce a statutory appeals process for adult social care. As a minimum, the process should:

Deborah Alsina, Chief Executiveof Independent Age, said, “Having to make a complaint is hard enough for many older people and their families, without the added complications of not knowing how to do it, or how long it will take.

“The one in five councils who do have a process are actually going above and beyond what it expected of them. Although this is brilliant, there needs to be a statutory appeals process so that no matter where you live, the way to appeal a decision will be the same.

“The government has previously acknowledged the need for this and even consulted on it in 2015, but they never published a response and nothing has moved forward. That’s why we’ve published our report today: too many people are being left without the support they need, and with no idea about how to take control of their own care, and that needs to end.”

Michael King, Local Government and Social Care Ombudsman, said, “It’s essential for authorities to try to get things right at the local level before problems are escalated to us, so we welcome any moves to improve the way councils manage the assessment process for people in need of care.

“Any change in approach should learn lessons from similar existing appeals systems and follow the principles of good administrative practice, that is: easy to use, easy to access and with clear guidance for all who use it.”

Reviewing the case: The right to appeal in adult social care

This report, including new Freedom of Information research, highlights the importance of introducing a statutory appeals process for adult social care decisions. 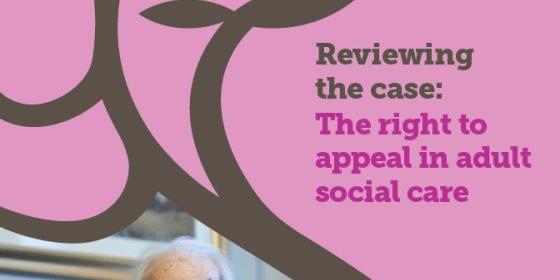 Reviewing the case: The right to appeal in adult social care