Agnes[1], 91, is fiercely independent and lives alone. According to her family, she has fallen victim to scammers a number of times, and they estimate she has so far lost tens of thousands of pounds. Agnes’s family wanted to share her story to help Independent Age, the older people’s charity, raise awareness of scams ahead of Scams Awareness Month this July, to help older people protect themselves. To this end, the charity has just launched a new, free advice guide, called Scamwise: Spotting, avoiding and reporting scams.

Agnes was first targeted by scammers in 2014, who her family believe were operating from highly sophisticated call centres in different countries, trying to sell her shares that were actually worth nothing.

Agnes’ daughter, Catherine1, and son-in-law, Rodney1, only realised that Agnes was being targeted by scammers when she rang them to ask to borrow some money, saying she had to make a payment on her shares. They then found out that she had spent all of her savings buying worthless shares, with the family estimating she had spent thousands of pounds.

Rodney says, “Scammers are leaching money drip by drip from my mother-in-law. They are crooks and wretched people. They are disgusting. The problem is that when she dies she wants to leave something to her grandchildren. I feel powerless to help her.”

An estimated half a million older people in the UK have fallen victim to a scam[2]. However, the real number could be much higher because many people may feel embarrassed to admit they’ve been conned. Although anyone can be the victim of a scam, older people may be more vulnerable because scams often target people who live alone, are at home during the day, have more savings and valuables and are willing to talk to fraudsters. In 2015, the Financial Ombudsman found that 80% of phone scam victims were aged over 55 and 65% of doorstep scam victims were over the age of 75.

Rodney immediately reported the scam to the police. He then found out that his mother-in-law had received a call from someone offering to buy back the shares from her, if she made a payment to “release the funds”, when she asked Rodney and Catherine for a loan of £4000. The couple recognised this as part of the fraud, and tried to persuade Agnes not to send any more money.

“But,” says Rodney, “she sits at home and talks through the calls that people make to her. She talks to anyone that phones her.”

And Agnes’ problems didn’t end there: being the victim of one scam meant that Agnes was then targeted by more scammers by being put on what is known as a ‘suckers’ list’.

Rodney continues, “After that came a raft of companies trying to flog her stuff by mail and phone. They’d tell her ‘You have won a house,’ or, ‘Congratulations! You have won £15,500’, ‘You will be lucky’, ‘There’s a cheque waiting for you’, or ‘Act now to see if you are a winner.’ None of these ‘prizes’ were ever going to arrive. They are scams. It was so frustrating trying to communicate that to her.”

He feels frustrated that these ‘cheque with your name on it’ scams have been exposed on TV and by newspapers over the years and yet they still carry on.

Rodney and Catherine only found out by chance that Agnes had been the target of these scams when they discovered she was losing £600 a month. At first, they thought that Agnes’s account had been compromised. They then found out that she had been sending cheques to these companies to buy items from them; often she didn’t even know if the things she had bought had been delivered.

“She tells me she is buying the stuff for her friends in the village. She is being secretive about what she’s doing,” says Rodney, “We have tried to sit down and talk to her about it. It’s tragic, scammers are taking advantage of her. Her mail is awash with junk mail. I think, at the end of the day, whatever money she has left in her account, it is her right to do with it what she wants, but these people are villains.”

Independent Age has launched a new, free guide, called Scamwise: Spotting, avoiding and reporting scams, to help people like Agnes and their families recognise scams and know what to do if they spot one or if they think they have been the victim of a scam, as well as advice on how to protect themselves from being scammed.

Lucy Harmer, Director of Services at Independent Age, said, “Agnes’ story is tragic, and even with support and advice from her family they say she still ended up as a victim and losing probably tens of thousands of pounds. For older people who think they may have been scammed, it’s important to remember that anyone can be a victim of a crime and it’s nothing to be ashamed of. The most important thing is to report it so you can get the support you need and to help prevent other people being targeted by the same scam. It’s also good to be aware of the tactics scammers use and learn how to protect yourself. There are a few, simple things you can do, such as hanging up on cold callers, or registering with the Mailing Preference Service to reduce the amount of junk mail you get, and never giving out personal information. You can find this and more information about scams in Independent Age’s new, free Scamwise advice guide.”

Scamwise covers topics such as how to spot and avoid scams, how to protect yourself against scams, who scammers target, types of scam, what to do if you’ve been scammed and how to help someone else who has been scammed.

[1] All names have been changed to protect identities

How to spot, avoid and report scams 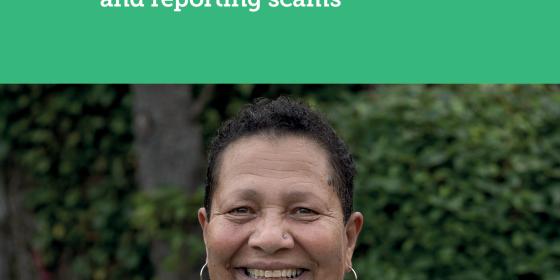