Millions of older people putting off difficult conversations about ageing

Millions of older people are putting off difficult conversations about ageing until times of crisis or not having them at all, according to new research from Independent Age, the older people’s charity.

Research carried out by ComRes for Independent Age[1] suggests that almost two thirds of those aged 65 and over (around 7 million people[2]) have never had a conversation with their family about key issues including preferences for end of life care, where they would like to live if they can no longer live at home, and who will care for them. And more than a quarter of those aged 65 or over said they are not planning to discuss these issues in the future.

The charity has warned that by putting off difficult conversations about ageing, families risk making rushed decisions about care, health, housing and financial matters at times of crisis.

A ComRes survey commissioned by Independent Age asked British adults which topics they would find it most difficult to discuss with their families. Forty-six percent of respondents listed ‘preferences for end of life care’ among the three most difficult to discuss, followed by ‘who will care for me when I’m older if I need it’ (42%) and ‘where I would like to live if I can no longer live at home’ (34%).

The report found that while the vast majority of the public believe that it is important to talk to older relatives about these issues, only a minority have actually had these conversations:

The research found that there are a number of reasons people put off talking about ageing, ranging from the practical to the emotional. ComRes asked British adults which factors might stop them having a conversation about preparing for older age:

Independent Age has today launched a new online guide to help families who want to talk to relatives about ageing. It lists the top five conversations the charity believes all families need to have, as well as information and tips on how to start a conversation.

“But these are issues that only get more pressing with time. It is vital that families start talking about these issues now, so they’re not left making important decisions at times of crisis or suddenly struggling to cope with significant caring responsibilities.”

Independent Age also carried out focus groups and interviews with both older people and working age adults to inform the report[3]. One adult son told the charity “I heard dad say under no circumstances must you let me get put in a home and now I don’t know how to talk to him about it” (Male, aged 55-65)

Others suggested they were waiting for a trigger event before having a meaningful conversation:

“It’s when something happens – I think that’s when the big proper conversations will happen” (Female, 55-65)

While an older women, aged 75+ told researchers she wanted to protect her family from being upset:

“I think, ‘oh I won’t say anything…you don’t always tell them because they are going to worry”.

The charity say it is only getting more important for families to have these conversations. Cuts to social care budgets and a rapidly ageing population mean fewer people are receiving care from local councils, and older people are increasingly reliant on informal care from family members or left facing huge care bills.

It is estimated that the number of older people living with a disability will rise from 2.9 million to 4.8 million between 2015 and 2035[4]. Over the same time period, the number of disabled older people receiving informal care is projected to increase from 2.2 million to 3.5 million.[5] According to figures from ADASS, local councils provided 400,000 fewer people with social care services in 2013/14 than in 2009/10.[6]

But Independent Age also says that families should not just be left alone to deal with these difficult and often complex issues. A range of key agencies – from information and advice providers, to local authorities and to the NHS – must improve the accessibility of information on care, to help people have meaningful, informed conversations. Previous research from Independent Age has shown that 70% of local authorities who responded to a Freedom of Information request are not providing online information in all the areas required of them by the Care Act.

And Independent Age says the Government needs to rebuild confidence in the future of the health and care system. Whether it is reports about 15 minute care visits, neglect at care homes or a struggling NHS, public perception of health and care in later life can be poor. To make decisions about their future care options, people first need to have faith in the care and support that is available.

Advice Caring for someone

Why it's good to talk about the future

Talking about important and sensitive subjects. 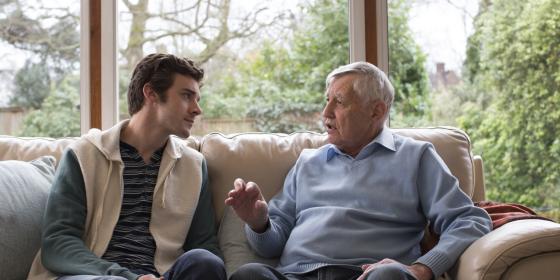 Why it's good to talk about the future