Being prepared for a cold winter could help save lives, says older people’s charity

Older people and their families are being urged to prepare for cold weather in advance this winter. Older people’s charity, Independent Age, says adequate preparation could help save lives[1]. To help older people, their families and carers get ready, the charity has updated its Being Winter Wise guide, which offers advice on how to keep well and stay safe during the winter months.

The latest figures from the Office for National Statistics (ONS) found that an estimated 43,900 excess winter deaths occurred in England and Wales in 2014/15, the highest number since 1999 despite relatively mild average temperatures. Of these, 83% were among people aged 75 and over[2]. The charity says that while cold temperatures alone do not cause excess winter deaths, older people are particularly vulnerable to the cold because of other underlying factors such as inadequate housing, poverty and ill health.

Meanwhile, last winter, a survey by Independent Age found that an estimated 752,000 older people have had to choose between paying for food and paying for heating and almost half (43%) of those aged 65 and over said they have gone to bed early to stay warm at least once[3].

Older people may find they have to heat their homes for longer due to health and mobility problems and the need to stay indoors for longer. Around 1.6 million older people live in poverty, 900,000 of whom live in severe poverty[4], which could affect their ability to pay fuel bills. Meanwhile low temperatures can not only increase the risk of flu, but also the risk of heart attack or stroke[5].

The free guide provides practical advice and tips to older people, their families and carers on how to look after themselves during the coldest months. The advice spans from eating well and staying healthy to keeping your home warm and making winter more affordable.

Janet Morrison, Chief Executive of Independent Age, said, “Older people are more vulnerable than the majority of the population when extremely cold weather hits[6]. Much more needs to be done to ensure that older people get the support they need in winter, such as putting preventative measures into place on a national and local level or prioritising energy efficiency for vulnerable older people as part of the government’s fuel strategy. There are also many practical actions individuals can take. These include wearing several thin layers of clothing, having more milk and dairy to help boost the immune system and drawing the curtains before it gets dark to keep the heat in. This and more advice for winter is available in our free Being Winter Wise guide for older people, their families and carers."

Being Winter Wise is free to order and download from independentage.org or call 0800 319 6789 to order a copy.

[3] Survey carried out for Independent Age by OnePoll in November 2015, questioning 1000 adults aged 65+

Practical tips on staying warm and healthy in the winter months 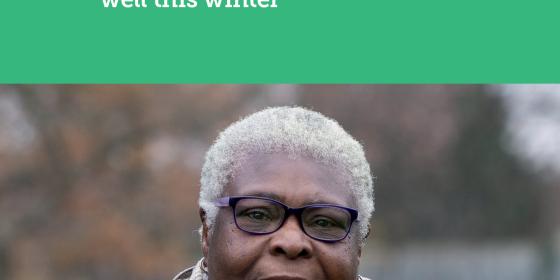