Helping charities to rebuild services for people in later life

We have provided £3.3 million in support to smaller organisations to help them respond and rebuild in the wake of the coronavirus pandemic.

The Grants Fund has provided urgently needed funding to 258 charities across the UK to help them deal with the challenges presented by COVID-19.

With our help, these organisations have kept vital services running – providing advice, support, opportunities and practical help to people in later life.

The most recent rounds of funding from the Independent Age COVID-19 Grants Fund have supported the re-opening of face-to-face services for older people. So now, as the country emerges from the pandemic, this fund has closed.

In line with our updated strategy, our grant-making will now include supporting vital national strategic partnerships and see our first steps in developing a new local grants programme.

You can find more information on our Grantmaking page.

Meanwhile, there are many other ways you can get involved with our work and help to rebuild after the pandemic – see how you can volunteer with us, join our campaigns or help us fund vital services for older people.

The coronavirus pandemic has affected everyone, but older people have been among the hardest hit. Not only have older people often been most at risk from the disease itself, but they have also been severely affected by the measures brought in to tackle the spread of the virus.

Already at risk of isolation and poor mental health, many people in later life were cut off during the lockdowns from the people and services they rely on– a time when they needed them most.

Organisations that work most closely with older people have also faced significant challenges. During a period when demand for their services increased dramatically, many of these charities had to drastically alter the way they delivered services in lockdown, while their usual avenues for raising funds were also affected.

Independent Age’s Grants Fund helped to sustain hundreds of smaller charities across the UK that otherwise would have had to scale back the services they provide to older people – or risk closure.

From community transport groups in Scotland to care groups for older people in the South West, our grants have supported organisations working with people in later life at a time when their services were needed most. This financial support has been vital for charities helping those most affected by coronavirus and lockdown.

Nigel Brookhouse, CEO of Narthex Sparkhill in Birmingham, said: “The Grants Fund offered hope at a time when many felt utterly lost.”

Since May 2020 we have made grants totalling £3.3 million to 258 organisations, supporting many different communities of older people and a wide range of work. 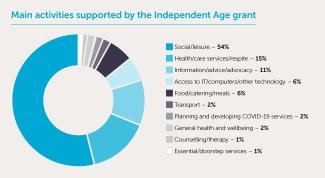 Examples of work funded across the UK

The impact of this pandemic will probably be with us for years to come. At Independent Age, we will continue to listen to older people and the organisations working with them.

Through our current and future grant-making, as well as our own services, we will explore and promote ways through which we can support those working directly with people in later life across the UK – helping them to live well with dignity, choice and purpose.

You can find out more about our grantmaking by emailing grants@independentage.org